Testing and quality assurance guarantee that end-users will be satisfied with the software. Today, you can find many tools for backend and frontend testing to test software and check its functionality, usability, performance. In this article, you will learn what frontend testing is, its essentials, what types of testing are used to test frontend. Besides, we have got a free frontend testing checklist for you at the end of the post.

Why Is Frontend Testing Important?

Frontend testing is used to test the presentation layer of the software architecture. Simply put, a frontend tester should test the graphic user interface (GUI). For example, web app testing will include the testing of such functionalities as forms, graphics, menu, and other visual elements.

The testing stage can impact any software development life cycle. Once user acceptance testing is performed, the customer can ask for a change. Frequent change requests, in their turn, impact the software delivery time and project cost. Thus, testers should do their best to perform all types of testing and run all possible scenarios.

With rapid technology development and a growing number of user demands, frontend testing has become as crucial as backend testing. While performing frontend testing, test engineers must test the performance and functionality of a web app in various browsers and on different devices where it is expected to run.

Bugs in Frontend and How They Influence User Satisfaction

Today, when development teams are capable of delivering releases faster than ever before, there comes a risk of delivering more bugs and defects, as well. That has negative effects on user satisfaction, increases the cost for development, and prolongs the duration of the project. All these effects can be prevented with better quality assurance.

According to the System Sciences Institute at IBM, bug fixing during implementation costs 6x more than doing it during the design phase. Fixing bugs during the testing stage can cost 15x more than finding and fixing defects within the design.

To limit the number of bugs and reduce the cost of diagnosing and fixing bugs, get familiar with frontend testing types. But before that, below we offer to check out the most common bugs that you can meet on the frontend side.

Unoptimized images. Unoptimized images that weigh too much, for example, 5 Mb may cause a real problem to your web app bandwidth. Unoptimized photos and pictures overload your website and make its loading speed very low. Surely, this won’t make your end-users happy with your service. So, before publishing any visual content on your website, make sure it is optimized, has the required size, and is of high quality.

Cross-browser incompatibility. A web app should run correctly on every browser specified in the requirements: Firefox, Chrome, Opera, etc. While developing a web app, a developer can use primarily only one browser to check his work. It is a bad practice as once the product’s development is finished, it may happen that the app doesn’t function correctly on other browsers.

Incorrect forms. Filling in a form on a website is commonplace. However, very often users fail to register because of an unlimited number of characters, too many fields to enter data, or too heavy files uploaded. Forms should be developed and tested thoroughly because it might cost you hundreds of lost clients.

Missing or incorrect SEO. If you would like your website to be found by thousands of users, you should take care of correct metadata: title, description, keywords. Those should be relevant to your target audience, found and written by SEO specialists, and injected in the page content by copywriters. Very often, it’s a frontend developer’s responsibility to upload all the required content onto the page. And sometimes, they may forget about the title or description or put something they wrote on their own.

Missing adaptive design. With the growth of mobile devices with different screen resolutions, there’s a strong need in frontend testing. Once the software is developed, its interface should be adapted to various screens to ensure seamless navigation and user experience. Today, that’s not a problem as there are many frameworks to build a responsive design.

We have already mentioned a testing strategy that must be created by QA engineers to deliver high-quality software. A testing pyramid is one of the most popular ways to build an effective strategy. It includes different types of tests concerning its sequence. Here’s how the simplest pyramid looks. 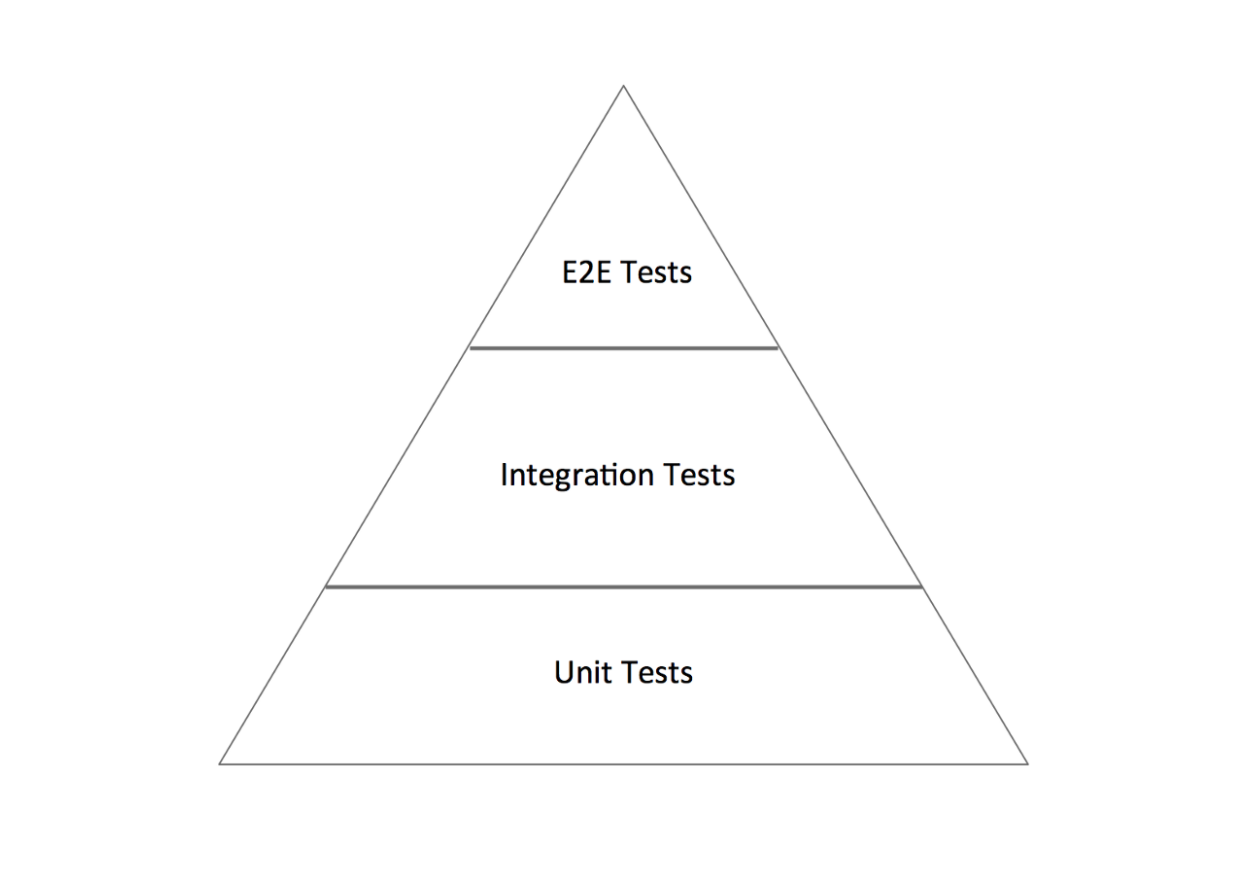 Unit tests are located at the bottom of the pyramid. Unit testing is all about testing small units of code in isolation. Usually, developers do unit testing in parallel with development. Unit testing is very critical as it helps detect bugs and errors in code in the early stages of software development. It is mainly done by developers themselves as they know exactly how this or that unit of code should behave once being run.

Integration testing is performed after unit testing and is aimed to test how the units work together. The primary goal is to test the interface between the modules, for example, a login page and an admin page. The other goals are as follows:

Basically, there are three approaches to integration testing:

E2E testing is performed to check how your app is functioning from beginning to end. You are testing the software product not only as if it is developed but as if you were a user using it. It is all about user experience. The most important thing for testers is to have in mind that they need to consider their users. Thus, it is very critical to have the perspective of the user journey — what is the user will actually experience.

The goals of end-to-end testing include the following:

There’s another type of experience-based testing technique which is called exploratory testing. It is described as simultaneous learning, test design, and execution. Traditionally, this testing is done if there’s pressure in time, or there are poorly defined requirements and specifications. While the tester checks the system, he generated new tests to run.

What Is Automated Frontend Testing?

There are lots of frontend testing frameworks JavaScript, HTML, CSS, and many more. Among the most popular frameworks for JS automated testing, there are Jest, Mocha, Jasmine, Puppeteer, Karma, Cypress, Tape, Nightwatch, etc. At Apphawks, we use Cypress and would like to share with you how this framework works.

No other testing framework has such clear and complete documentation like Cypress does. It includes APIs, many guidelines, including guides on configuring from original Cypress developers.

Cypress is a modern framework for automated testing that has the following features:

Testing with Cypress is easy as there are no special requirements to install and configure the frameworks. Tests created in Cypress are easily readable. Error messages appear for quick debugging.

Cypress supports a great number of browsers, including Firefox, Chrome, Electron, Edge, Brave. Below is a picture demonstrating how Cypress works and how it is different from other frameworks.

As you can see, Cypress works without Selenium. Cypress specializes in frontend end-to-end testing instead of messing around. Besides, it works on any website or frontend framework.

Cypress is recommended as the best framework for those who just start with automated testing. It includes JQuery, Chai, and Sinon extensions. It allows you to get powerful tools for searching and checking DOM elements.

Cypress is an excellent tool for debugging processes as you see how tests are running in real-time. Besides, if there are any changes in the code, Cypress will automatically rerun the test without your efforts. After the test is finished, you can go back and look at any part of it (Cypress saves screenshots and videos).

Frontend Testing Checklist for a Newcomer to Testing

If you are a newcomer to frontend testing, you will find the checklist below helpful.

You can add a limitless number of statements and questions to this basic list while getting more experience with front-end testing.

At Apphawks, we offer professional backend and frontend testing. To get our testing services, just reach out to our team. We will need your project requirements to develop an effective testing plan and strategy.

Fleet management apps are critical for businesses that have to deal with logistics. How to develop custom fleet management software? Let's find out.
Read more

Usability Testing: Why It Is Important For Your Minimal Viable Product?

Here are the essentials of usability testing. Why is it important to test the usability of your MVP? Standard usability testing process.
Read more
Apphawks
Join our Newsletter
Only one message per month
Get started today
Grzegorz Kłos
Co-Founder
office@apphawks.com